The Dutch Defense is a chess opening for Black against 1.d4 and occurs after the moves 1.d4 f5. It is a fighting chess opening as Black immediately unbalances the position.

The Dutch Defense is an exciting opening choice, especially at club level, and is a good option for players looking to win as Black against 1.d4. The reason for this is that many positions in the Dutch Defense promise Black more active play than in most other openings. Black is able to avoid early simplifications and can enter unbalanced positions, which allows him to play for more than equality.

Learn everything you need to know to confidently play this chess opening with this Dutch Defense Tournament Player’s Bundle. Here is what’s included: 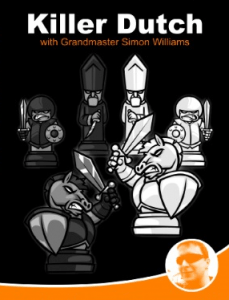 The Classical Dutch Defense is a fantastic defense system against 1.d4 that is guaranteed to catch your opponent by surprise.

Grandmaster Simon Williams is the world’s leading expert on the Classical Dutch Defense, and the British GM is certainly not shy about sharing his secrets in this premium 6-hour DVD. You will discover the most powerful chess opening of meeting White’s favored variations, and learn how to play this system like World Champions Botvinnik, Kramnik, and Carlsen.

You are letting White know you mean business. You are claiming that e4-square, opening up the “King’s Short Diagonal“ despite making life a bit hard for your light-squared bishop.

The moment you push f7-f5, you make imbalances right off the bat — where you are looking to exploit every weakness in White’s position.

The Dutch Defense sounds powerful, right? And that’s why you need to know what you are doing.

You don’t want to be snared in your own traps.

You don’t want to go “all in” and end up losing the steam against your opponent’s counterattacks.

You want to be so geared up that every MOVE you make assaults your opponent’s position (no mercy!).

That’s why you need GM Miloje Ratkovic’s 10+ hour video training course where he goes through the major systems and breaks them down for you to unleash a hellish attack on your opponent from move one. Trusted by many strong Grandmasters including Hikaru Nakamura, Alexander Grischuk, Vladimir Kramnik, and Veselin Topalov, the Dutch Defense is a perfect choice for those who want more than a draw with the Black pieces.

A powerful and reliable weapon, the Dutch Defense gives you all the bells and whistles you need to outplay your opponents with Black!

The Dutch Defense was employed regularly in the past by Alekhine, Larsen, Morphy, and Najdorf. The high-water mark for the Defense occurred in 1951, when both Mikhail Botvinnik, the world champion, and his challenger, David Bronstein, played it in their World Championship match. Not found as often in modern games, but regularly used successfully by GM Hikaru Nakamura.

Content: 144 minutes of instruction and analysis in a series of 6 lectures. PGN Included.

Chess Fans have said: Very clear and concise lecture. I not only learned how to play against this structure of the Dutch but also received side lectures on when to give up the bishop pair, the right moment to open up the position, and above all, a tactical motive to burn into memory.

GM Miloje Ratkovic [2499 FIDE] is a Serbian Grandmaster with a FIDE Rating of 2499. He obtained the GM title in 2021. He has conquered many National and International events. He is a professional player, chess coach, and twitch streamer. GM Ratkovic is also a huge fan of online blitz with an Elo over 2785.

LM Dana Mackenzie is a USCF Life Master, a PhD mathematician, and award-winning mathematics and science journalist and author. LM Dana Mackenzie started playing tournament chess during the ‘Fischer boom’ of 1971-72 and for some reason never quit.

He was the champion of North Carolina in 1985 and 1987, and became a master in 1988. In 2009, Dana received his Life Master certificate from the USCF, and in 2012 was a member of the West regional champion team in the US Amateur Team tournament.

GM Eugene Perelshteyn was born in Ukraine and learned chess from his father, a FIDE Master. He moved to the United States at the age of fourteen and won the U.S. U18 Championship in 2000. Eugene earned a chess scholarship from the University of Maryland, Baltimore County, where he graduated in computer science. In 2002 he was awarded the Samford Chess Fellowship – given to the top American Player under 25 years old – which helped him earn the GM title in 2006. He is the co-author of two books: Chess Openings for White, Explained and Chess Openings for Black, Explained.

IM John-Paul Wallace is from Sydney, Australia, and is currently residing in London, England. John-Paul was the youngest Australian Chess Champion ever at the age of 17 in 1993-94. John-Paul won the 2003 Pratt Foundation Australian Open Chess Championship and has represented Australia in two chess Olympiads. John-Paul is a chess journalist and a chess coach both online and over-the-board.

GM Simon Williams (aka GingerGM) is a popular English chess grandmaster, author, and commentator. He obtained the Grandmaster title in 2008 by accomplishing the final norm at the Hastings International Chess Congress 2005/2006 and the 2500+ rating at Hastings 2007/2008. In 2009, he organized the Big Slick International in Purley, London, which comprised an invitational GM tournament and FIDE Rated Open.